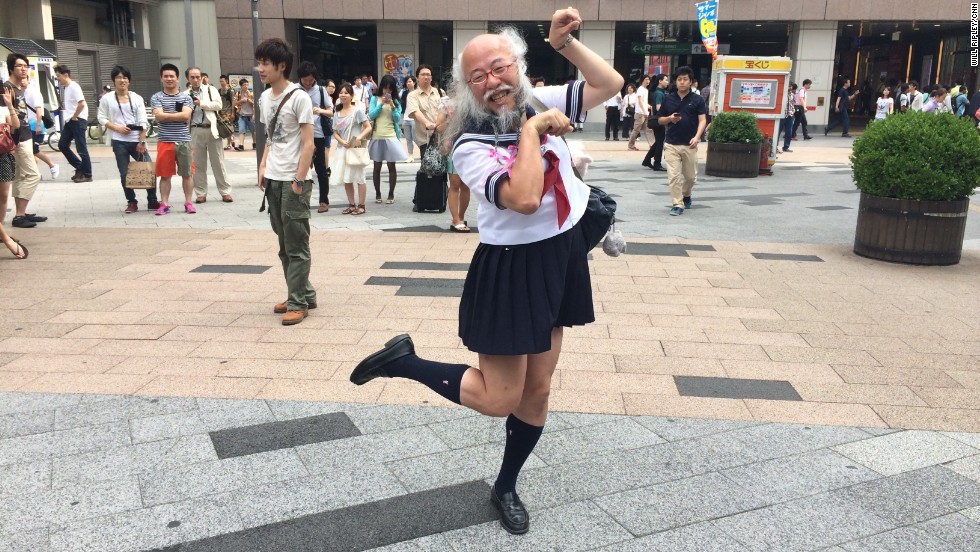 Rojin kobo On’nanoko
Old men-she (ロジン工房-女の子) .Rojin kobo On’nanoko expressed their long compulsive behavior with school girl uniforms. One of the popular Rojin kobo On’nanoko is Mr. Kobayashi. He has seen a refreshing sense of levity as many Japanese elders have felt.
“I want to give society an element of surprise and impact,” Mr. Kobyashi said. and I want to cheerfully enliven Japan.” And Kobayashi seems to be doing just that, one sailor suit at a time.
Enjoyable, relax and carefree
A few years back, however, Kobayashi started wearing schoolgirl outfits at a well-known art and design event. That eventually turned into Kobayashi wearing the threads out in public. And that turned him into an internet sensation.
Whenever he’s in his schoolgirl gear, Kobayashi is surrounded by people—often, real schoolgirls—who want to get their photos snapped with him. He recently wrote on Facebook how he’s mobbed for photos, in his own words, “like a popular celebrity”.
Great size, his appearance is unusual which he says makes him “feel comfortable,” is accepted on Tokyo’s streets.
He just seemed so comfortable, relaxed, and happy… I don’t know, embracing life. I think it’s great.”
And his unique take on life — and dress code — has garnered some unlikely admirers.
Be who you are and do what you feel

Men dressing as women is accepted in Japanese pop culture, Kobayashi says that real life reactions can be different — he says sometimes people shout insults on the street, and notes that he’s been stopped by the police as many as ten times.

Despite the negative attention and discrimination, he thinks it’s worth it. It’s still outweighed by the positivity of the throngs of people eagerly posing with him as he skips from Shibuya to Harajuku, and by the kids he’s able to reach with his message of tolerance, and how liberating being a non-conformist can be.

He says his story proves you don¹t have to be conventional to be accepted.

Our students want to SPEAK!

Have you got any interests on teaching English conversation? You may join us.

We showcase your Talent

We would love to hear your thoughts!