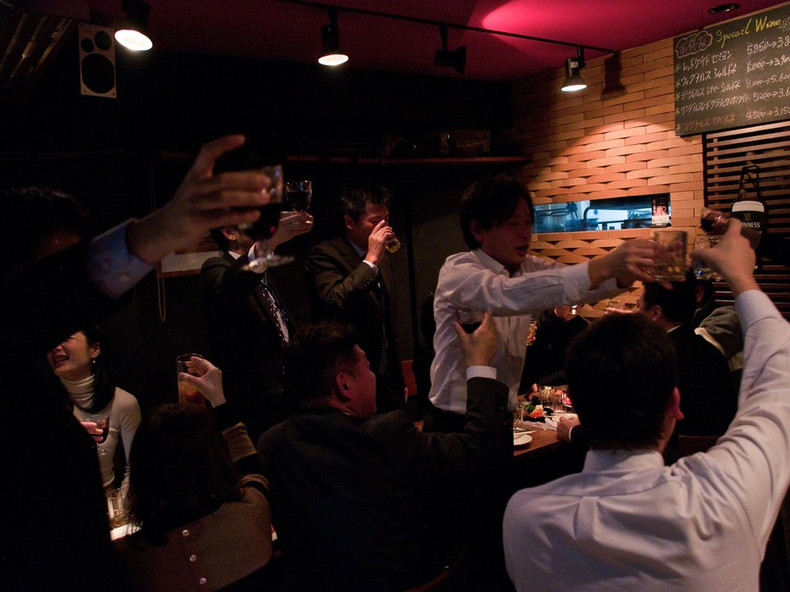 Bureiko is a Japanese term for the minor breakdown of rules that tends to occur at work parties, known as nomikai.

Japanese companies consider nomikai to be an important part of team building. Although attendance isn’t strictly mandatory, skipping a team nomikai may be perceived as problematic and is generally view negatively.

In many teams, any excuse is used to schedule nomikai such as work milestones, welcome parties and goodbye parties. There are also annual nomikai such as bonenkai or team hanami parties.

Although some people may choose not to drink, it’s common for people to become intoxicated at nomikai leading to the breakdown of rules known as bureiko. For example, junior staff may openly criticize strategy or people may openly discuss their personal life in much detail.

In many cases, bureiko is regretted the next day but people tend to be very forgiving. It’s very common for instances of bureiko to be completely ignored by coworkers in the light of the next business day.

Bureiko is widely regarded as being valuable as an alternative reality from the rigid rules that traditionally govern Japanese business situations. It allows ideas to flow more freely and teams to bond.

More and more foreign travelers are showing an interest in dipping a toe in Japan’s hot spring, or onsen, traditions...

Are you tired of hearing the problems of your friends over and over again? If your friend talks so much about their ...

YOU are NEXT EXCELLENT Teacher!

"Progressing through life, you will become one who seeks to expand and broaden opportunities to find new careers ...

Graduate of any two years course Must have 3 years formal teaching experience or more School Teacher of English su...

Why should you join PINAS GROUP?

Start your career from HOME! Home based online jobs

Apply Now! - Application form
Work close to Home and Keep fit at same time
Have you ever taught English online at home? If not yet, try and get surprise with Japanese kindness
Home
Japan's culture